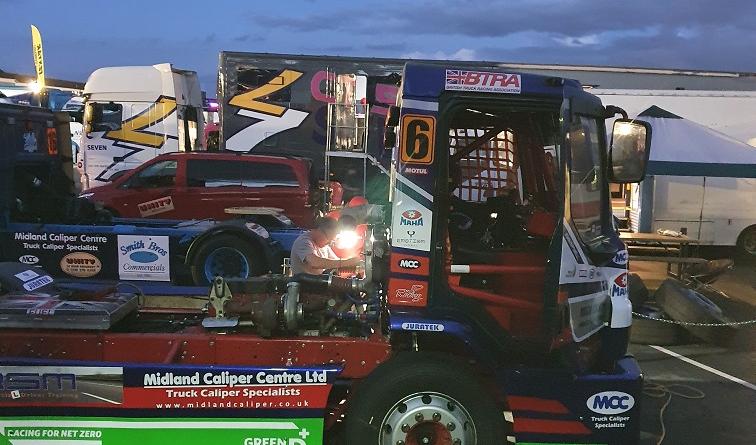 This was a weekend that we won’t forget in a hurry! After arriving and settling in at Donington, we took to the first test session with ease and trepedation, fully aware that we were running a newly rebuilt lump. Things were going pretty swimmingly, until the 2nd session, when 2 laps in….the turbo lets go. Worse still, it let go coming down the exhibition straight.

But, there’s more behind JP Racing than just JP himself, so the trusty pit team set about working into the night to replace the turbo and flush the system through of any debris and fragments. Yes…it really did ‘blow up’!

On Saturday, although weary from the day and night before, we now had a truck that was functioning again, and whilst we still didn’t really know what had caused our woes the evening before, we apprehensively started qualifying…

Now it’s time for the first race. Fingers were still tightly crossed at this stage but we decided that fortune favours only the very brave and we went for it.  The truck had some flying laps fighting for 3rd place, and for a while the events of the day before were all but forgotten, but a missed gear lost him JP 2 places and he eventually finished 5th.  But with 20 trucks having started and 4 having retired, this was a result that 24 hours ago seemed impossible and there were smiles all round.

Starting 3rd on the grid for Race 2 saw JP pushed into the gravel on first bend. Not to keep a good man down, John kept good pace with his ever growing confidence in the truck, but couldn’t make up the place. Another night, Saturday this time, was spent working on the truck, this time replacing the manifold after noticing oil on the chassis. You need eagle eyes in this game.

Sunday, and Race 3.  Starting on pole, John gets a good start and keeps position well until an incident forces us off the track causing some panel damage.  And we noticed oil leaking again.  A quick weld of the exhaust to manifold and a patch up of the panels had us race ready again. Just a few battle scars at the end of the day.

Race 4, Sunday.  John again starts on pole (he tells us he likes it there) and again holds position.  Is this his time? After everything the weekend had thrown at us?! The truck is performing well and we duly get our first win of the season. We felt we earned that one.  Disappointment soon followed though as we then discovered that received a 10 second penalty for over speed,  having been caught in the back draft of a division 1 truck.  This was pretty unavoidable unless John effectively opened the door for the 2nd place truck, so he just held in.  This penalty still saw us finishing in 4th place. Disappointing, but respectable.

For the final race (5) on the Sunday, John started 4th on grid and started moving up well.  A hard battle with his brother Steven for 2nd place was hard fought, before John received contact from the 4th place driver battling for our 3rd place position, causing the truck further damage and a steering issue which ultimately slowed us down.  But JP still drove the truck over the finish line to top off what had been an eventful, and partly succesful weekend. The truck is ‘there’ now in his words. Watch this space…

Sign up to our newsletter and get the latest on our team.

*you can unsubscribe at any time.

We use cookies on our website to give you the most relevant experience by remembering your preferences and repeat visits. By clicking “Accept All”, you consent to the use of ALL the cookies. However, you may visit "Cookie Settings" to provide a controlled consent. Read More
Cookie SettingsAccept All
GDPR & Privacy

This website uses cookies to improve your experience while you navigate through the website. Out of these, the cookies that are categorized as necessary are stored on your browser as they are essential for the working of basic functionalities of the website. We also use third-party cookies that help us analyze and understand how you use this website. These cookies will be stored in your browser only with your consent. You also have the option to opt-out of these cookies. But opting out of some of these cookies may affect your browsing experience.
Necessary Always Enabled
Necessary cookies are absolutely essential for the website to function properly. These cookies ensure basic functionalities and security features of the website, anonymously.
Analytics
Analytical cookies are used to understand how visitors interact with the website. The cookies collect information in a way that does not directly identify anyone. These cookies help provide information on metrics the number of visitors, bounce rate, traffic source, etc.
SAVE & ACCEPT
Powered by